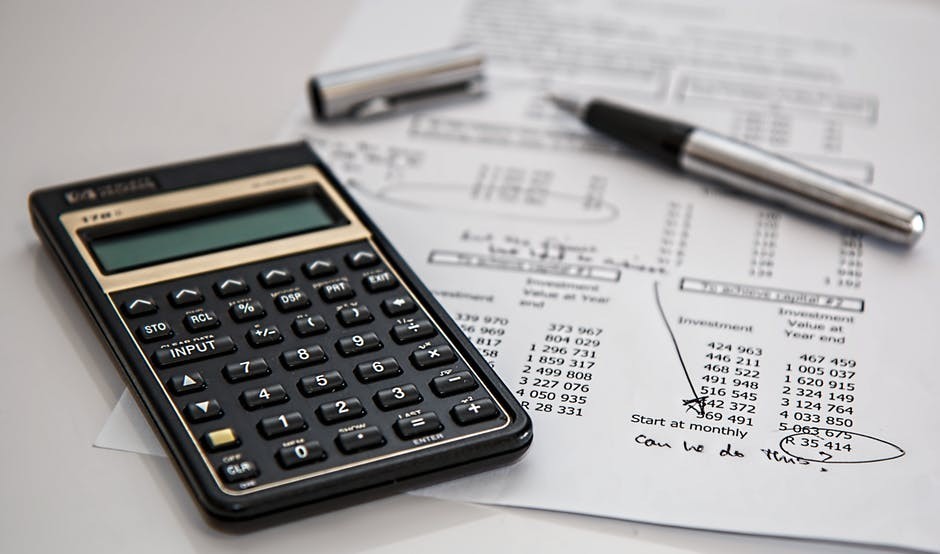 I noticed that when i was doing my vending business about two weeks ago. The sales were not that promising or constant as compared to the prior weeks. 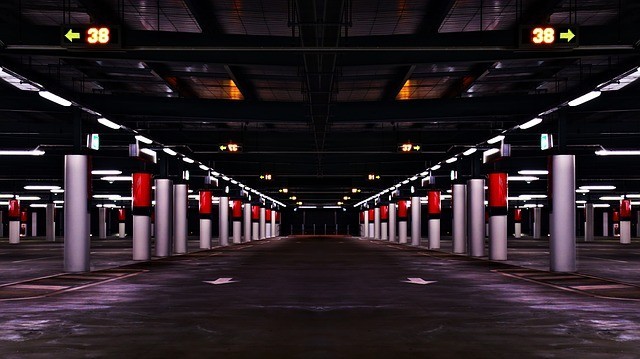 Actually to my surprise that all locations parking lot were about 50% empty.

I don’t need to ask the caretaker or the receptionist if it was in the office were the vast majority of the people went ?

As compared to last year when i was doing my route the sales were constant and everybody seems to stay put in town and never even have the thought of vacation time. Is it because every time during this time of the year i always say my usual hello and ask the people if they just came back from the holidays ? 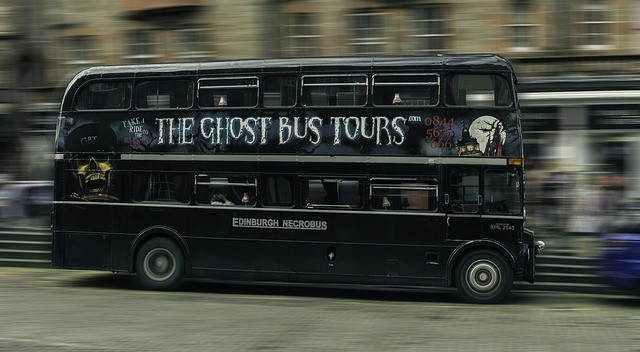 So it’s me and my mouth and mindset perhaps that would trigger the holiday mood my a small factor perhaps ? This sounded absurd and silly.

I have this location which i have been servicing for the longest time and was at the east side. The east side always lives up to it’s promise, summer or winter the sales has been cooperating tremendously with me.

Its just depends if you are willing to go and service the location more often to produce more sales.

In some locations if you go twice a week there will be about 25% more sales at the end of the month. I have this already computed through the various years that i have been running this vending machine business. 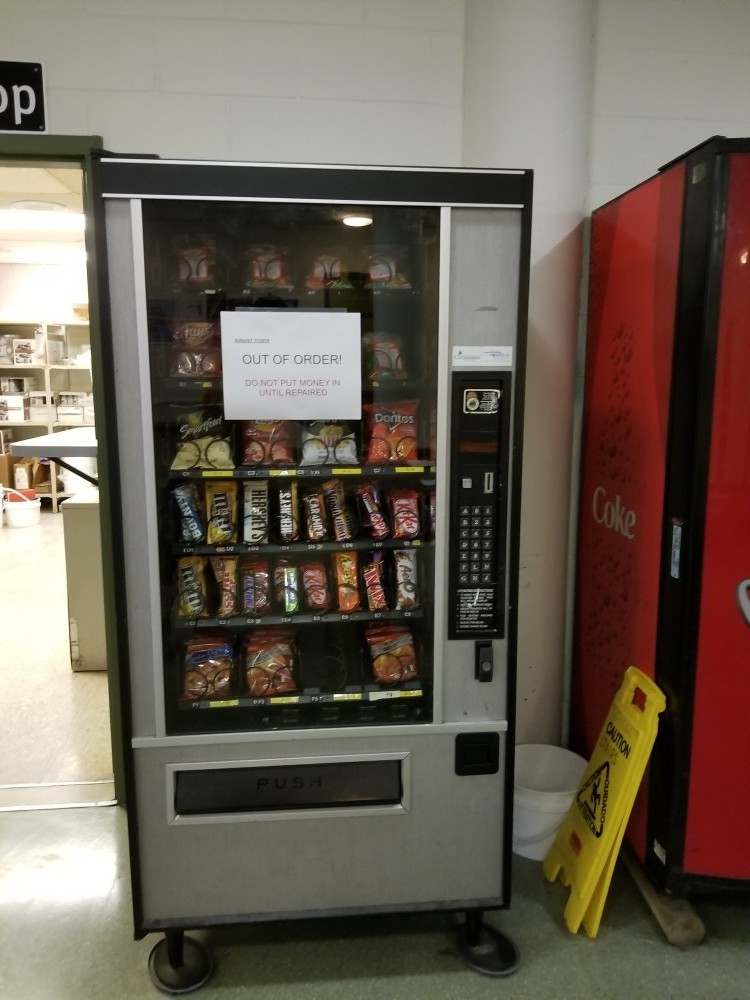 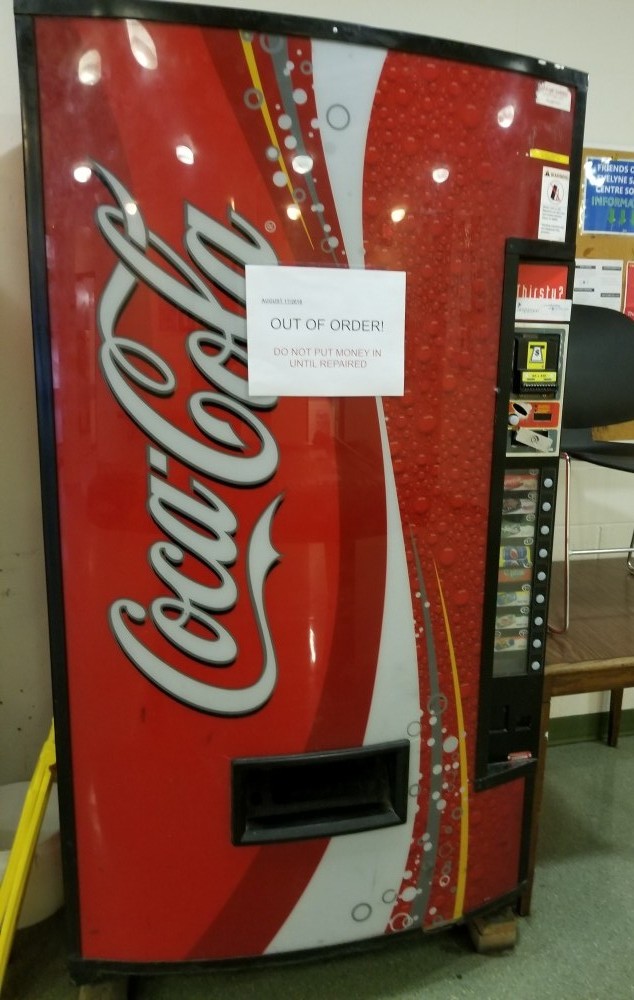 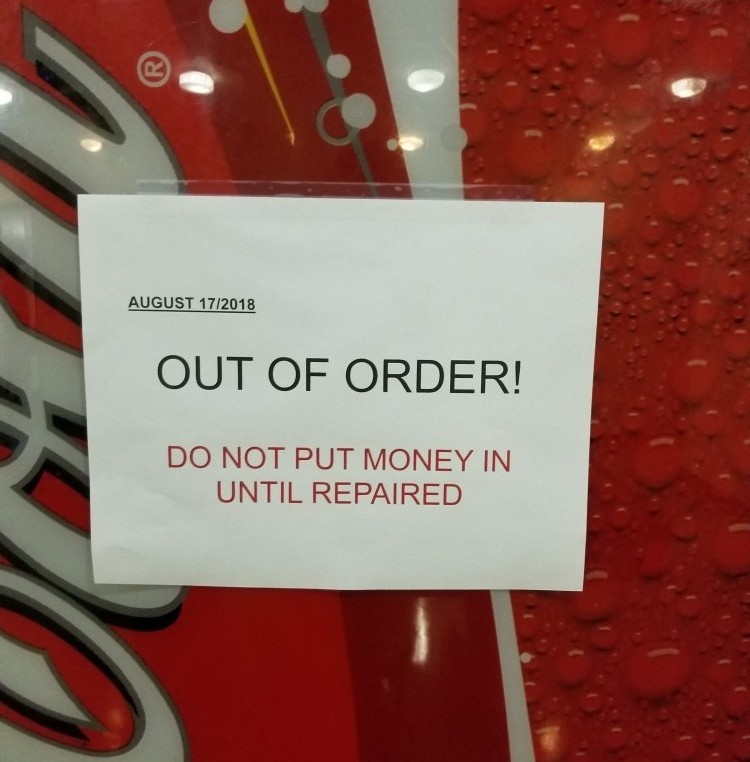 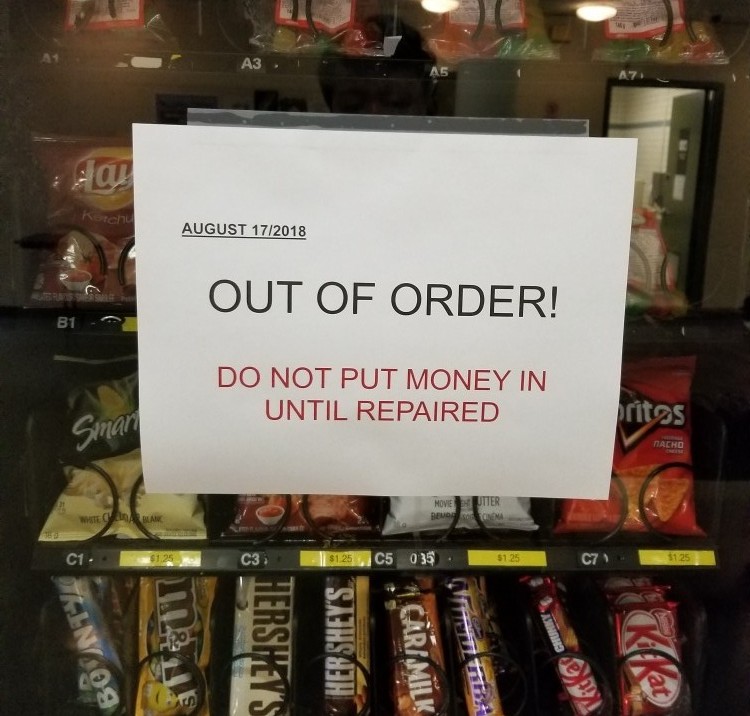 The location that i mentioned has not been nice to me. For two weeks in a row the snack machine is always jammed with coins. I’m still amazed till this time why locations in the east side of town, always have the same problem. 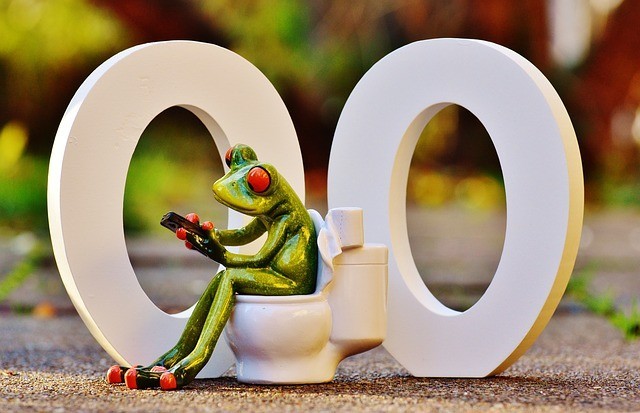 Understandably locations with a lot of children have more often than not problems with coin jams since they put coins in manner that it is too fast and will cause some coin jams inside the coin mechanism. Sometimes the solution is just by depressing the coin return button repeatedly which will release the jam coins.

Going back to the location that i was mentioning. For two weeks that i have visited the snack machine is always jammed and if there are people inside the lunch room they always curse the snack machine. I cannot just tell them how to use a vending machine properly.

Its so basic that there are no words needed in explaining to usage of a vending machine. 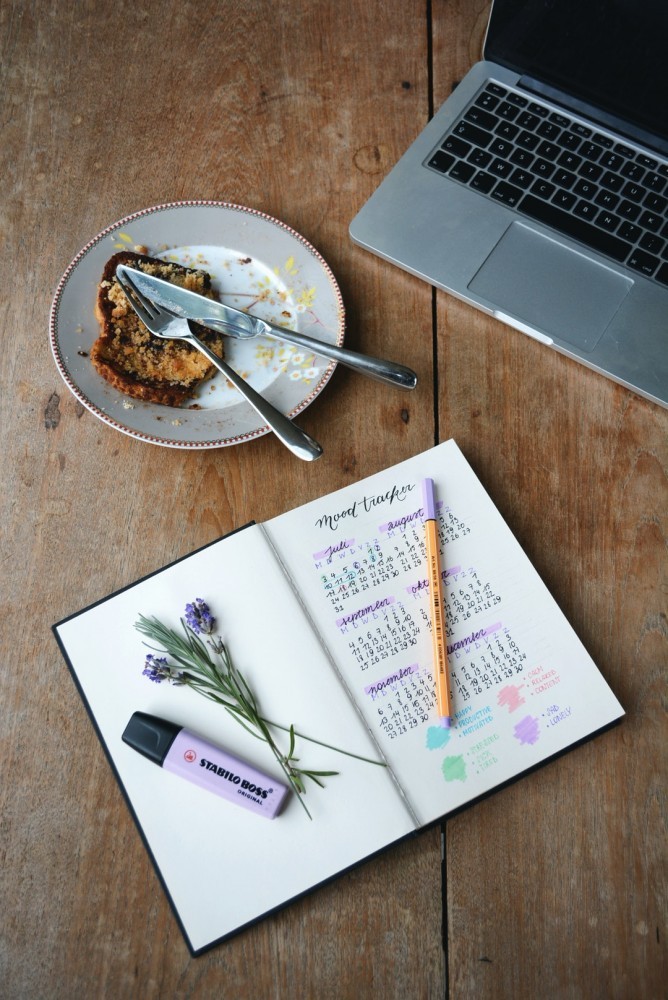 Actually this spark an idea, to reduce the downtime for me to visit locations that have coin jams, i was thinking of making an info graphic leaflet and just paste it on all the vending machines that i have.

I was very happy towards the weekend because normally it’s a big haul right before Sunday on my evergreen locations. 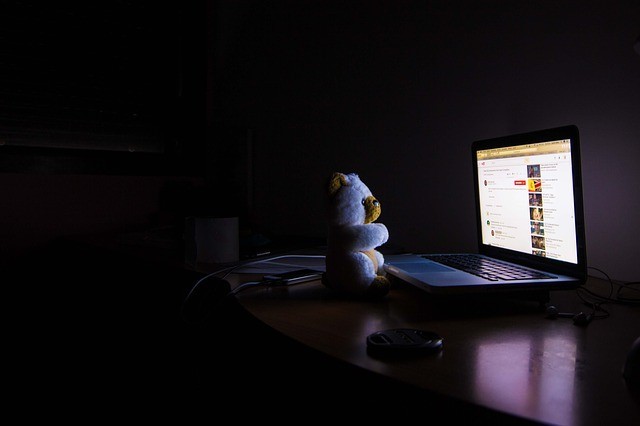 Right after i had it serviced the location called me and mentioned that both vending machines was out of order. I couldn’t sleep last night and i was even thinking maybe there was this person who loves to sabotage vending machines and very happy doing it. Like a fetish kind of thing. Ha ha-ha i must be joking.

I woke up very early on the weekend and raced the see what would have happened and imagining that there would be coin jams inside the machines.

To my surprise both machines doesn’t have power and it was a matter of turning on the breaker.

The machines are located inside a heritage building and sometimes the machines trips the breaker.

I went around the corner to service another location in the east side of town. To my surprise beside the machines was an air conditioner and the pop machine was unplugged again.

The last time i went there it was both machines that were unplugged and Out-of-Order sign was hanged and assistant manager came out and told me the air conditioner trips the breaker so both machines needed to be unplugged. 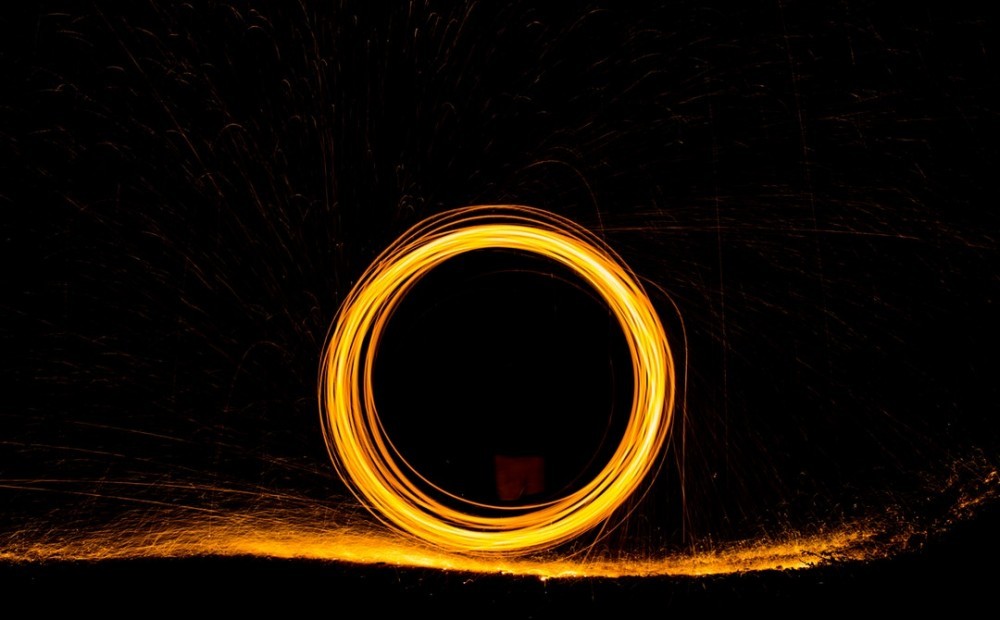 The sales of course were almost nothing when i was servicing the location.

I already mentioned that i was paying $75 per month for this particular space. Anyway since the sales is affected by unplugging my pop machine then i presumed the next check payment will be 50% off since i hardly have any sales at all for this location.

I headed down to a public place today and there was this fellow countryman which grew up in the Philippines but from a remote province. 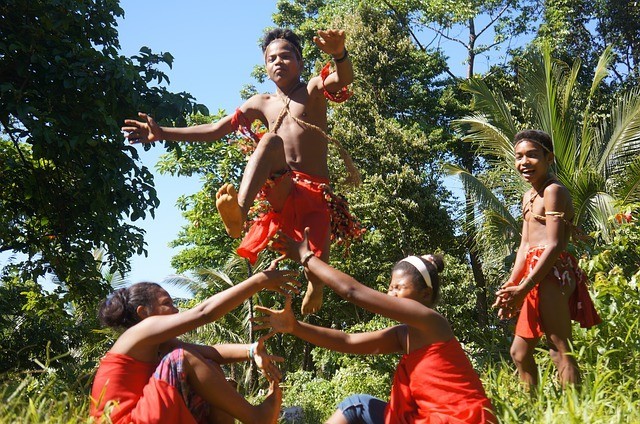 I always show respect and speak the same tongue which is Tagalog ( Tagalog is not my native language, i speak several, English is also not my native tongue ). 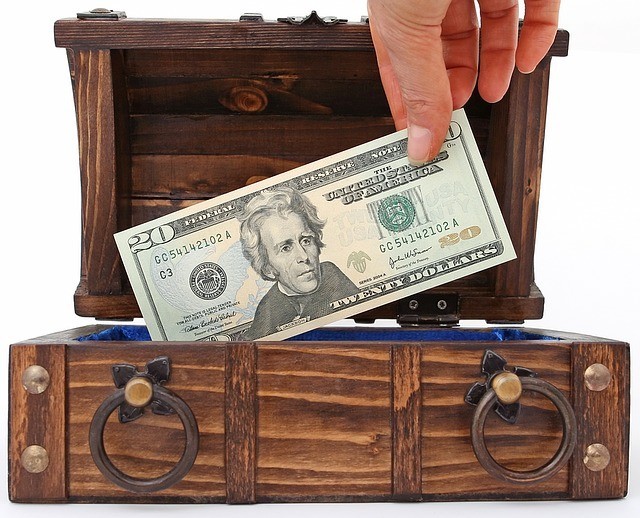 For some reason whenever i was doing my vending service in this location they repeatedly ask the same questions that im making so much money and was a lot better off than cleaning laundry and preparing beds.

Some other people think that my business is my exhausting and physically draining. But i tell you, once you get used to vending, it’s quite enjoyable to an extent that you always move around and don’t have to stay in one place. 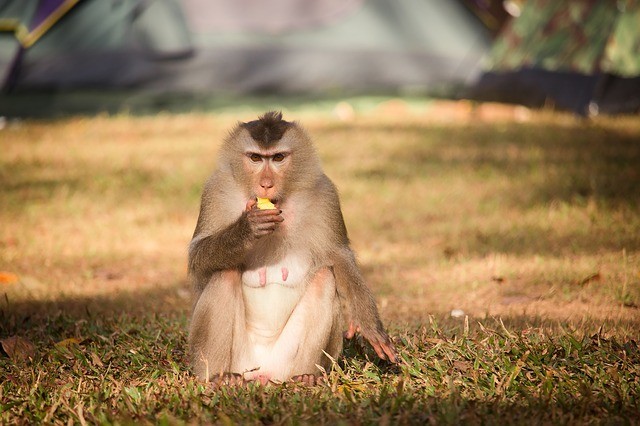 So while i was on the 2nd floor of the public place, the fellow countryman just stared at my bin and took a chip without my permission and he assumes that im going to recycle the chips or throw it away.

I jokingly told him that the chips are dated Sept 08 and im going to take it to another location and i normally rotate the products on different locations.

He told me it’s only one chip that he will be taking and it doesn’t make a difference.

I told him that do you do that to when you walk into 7 11 ? I also was about to get disgusted with a fellow countryman mindset.

Just because i speak the same language that does entitled you to take away i free chip? I told him that i have planned for scheduled visits, spend money on the most expensive gasoline in BC, unload the dolly and make a few cents per bag of chips.

I even jokingly told him that what if im not Filipino or speak the same language like you do, will you grab a chip on my bin and say thank you? Eventually i just say that im better than that and have to be understanding and flexible and let 1 chip not ruin my day today.

I try my best to speak the same tongue to everyone i met to please the person since im in the service industry and always have a constant smile in this line of business.

That’s why i mentioned that it is better to sometimes pretend that you do not know how to speak Filipino and keep a distance and step away from fellow countryman here in Vancouver, BC. For some reason if they know you are from the same country, there will always be freebies on your visits.

Don’t get me wrong, i admire some fellow countryman who has the same wavelength like me. Business, straight and no running around the bush. Plain and simple. Yes or no.

In this vending machine business sometimes you have to acquire a certain sense of emotional intelligence which i have mentioned before on my previous articles if you have been following me. 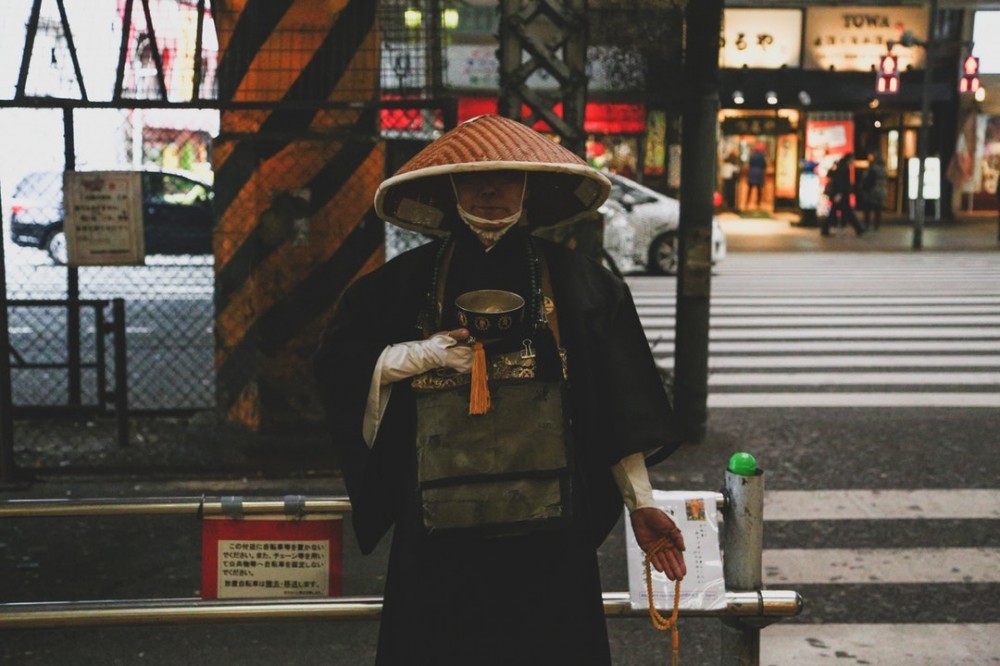 Sometimes it’s the emotional intelligence that makes or breaks a business. If you are a businessman you absolutely need a calm mindset.

Aside from these unfortunate incidents everything is always as expected.

But of course if you have locations that is related to school then some of your sales will be affected too. Don’t put your eggs into the same basket, like you just prefers schools or community centers type of thinking.

Everything has to be diversified. As with your stock portfolio.

Recently i acquired two new locations. I thought everything will be very smooth and no problems.

I even installed all machines with updated bill acceptors, new coin mechanisms.

The machines from two locations was sourced out from my suppliers.

I have another supplier which gives very good terms and conditions because all the machines are used.

Problem with buying the used machines is that sometimes it is a ticking time bomb. Like one of the snack machines motors suddenly malfunctions after one month of use.

Worst is that sometimes the snack machine doesn’t recognize any kind of coins. The machine just freezes just like a laptop or computer if it is way too used, it freezes and you need to reset it.

I’m saying that buying used machines is great but sometimes it is a lingering disease because the symptoms just pops up all the time.

The new locations i got which consists of a pop machine and two snack machines was constantly nagging me. I went to the location on several occasions when customers complained.

But when i reached there, i inspected everything and it was all working perfectly.

Sometimes when i acquire a new location, the people there are like the ones in the east side of town that doesn’t know how to properly use a vending machine. There are constant coin jams.

Actually i simulated this by having a bag of assorted coins to see if i can cause a vending machine to jam.

I insert about 60 dollars worth of assorted coins : nickels, dimes, loonies and twoonies. I inserted slowly in a way that i have to wait for the display on the vending machine to register. After doing this there was no coin jam.

Somehow im afraid to insert two coins at the same time, knowingly that it will surely jam the internal coin mechanism. I’m not a child in a community center that will cause it so it never happens to me while im simulating it with 60 dollars assorted various coins.

Seems like a burn out on me is on it’s way. Should i say that i need a vacation myself. I mentioned that it will just be around the corner.

My vending machine business will be in good hands if im away.

Here in Canada it’s very difficult to find someone that can be trusted and extremely expensive to have someone run it for you. Living in this world-class place needs to have a world-class pay as well. But there are always ways.

If you have been in business for the longest time. You know what to do and finding ways and there is always a strategy in all forms of business, it is just the manner on how to execute it properly and efficiently.

Let it be then if it is vacation fever.