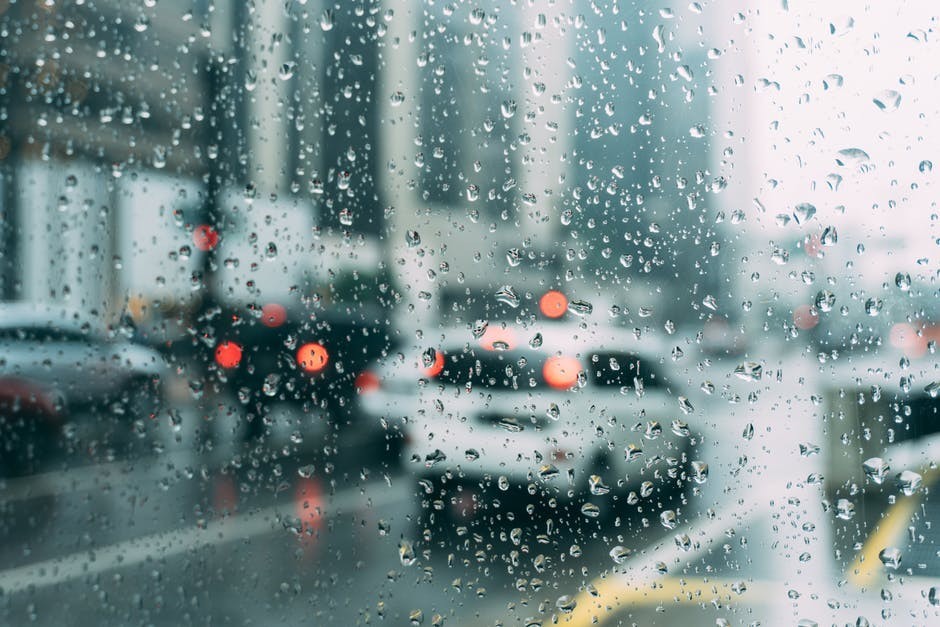 Seems like the rainy days are more frequent now here in Vancouver, BC.

There are so a good deal of news that people are getting sick of flu.

Well yesterday i was in a hurry to get some locations done and when i approached my van the driver’s side mirror is partially destroyed and some debris on the ground which i took some photos.

That day was rainy but of course you have to provide outstanding service as a vending machine service provider to your customers. Rain, Shine or snow is no excuse. 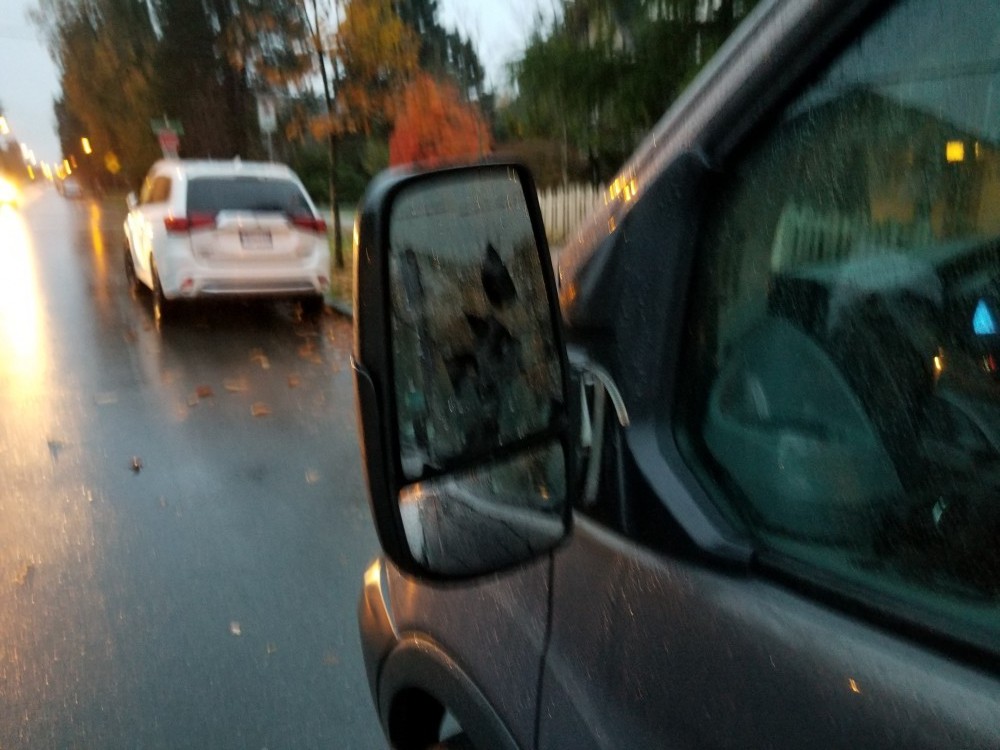 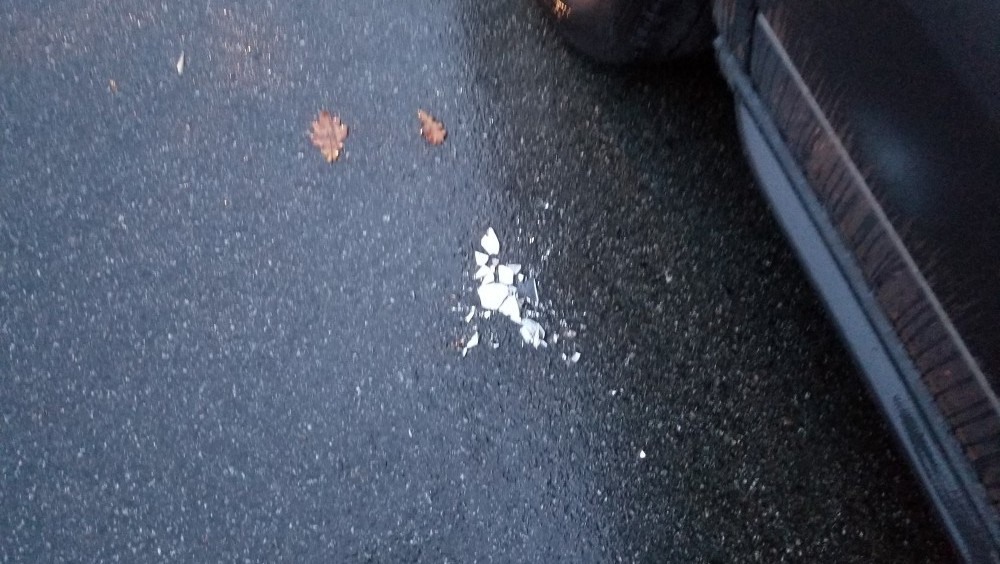 This was the same incident that happened a few years back when i was near west Broadway taking a quick sushi lunch treat break. That time the driver’s side mirror was also hit. I called ICBC during that time and they told me that i have to pay deductible which is $300 three hundred dollars and my monthly insurance will go up.

Since i had excellent driving history since i started during my twenties i hesitate to get a claim and instead will just hold on for a used driver’s side mirror at amazon or eBay when there will be plentiful of surplus in the near future when my van will be more mainstream.

Most of the cases that slows me down is not caused by me but people who simply doesn’t care and just do a hit-and-run.

I guess im more fortunate than an actual uneventful misfortune on the actual streets. 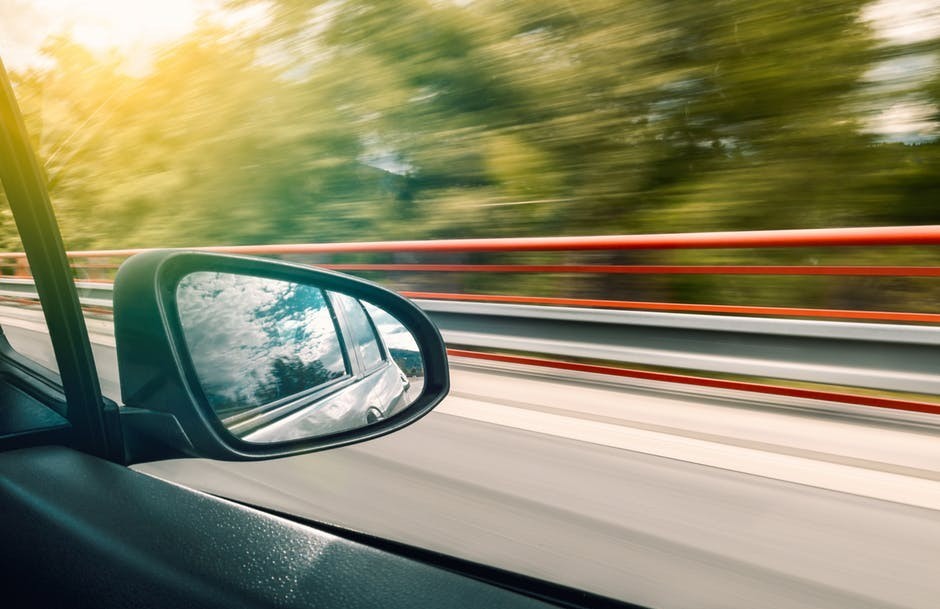 I hurriedly left to downtown where the locations are to be served during that day.

To my surprise there were a lot of contractors in the loading bay at one of my locations and i couldn’t park and made a quick turn on the side street in case there are some available parking space.

There were none so i have to wait at the loading bay when one of cars leave for me to park properly. The car that took off didn’t even have a commercial license.

It was another hurdle when i approached the elevator which i have to go to two ( 2 ) locations on the 25th floor and 19th floor respectively. This location is a 2 in 1 location for me.

Was thinking why is this Monday difficult for me ? I still consider myself fortunate since i was quick enough to use the tenants’ elevator instead of the freight since it was out of order and security was kind enough to allow a heavy dolly filled with lots of products to use the tenants’ lift.

It is a good thing that the people there seems to be very emphatic towards small self employed vending machine service operators.

I made some remedy on the situation last week and there was the icy buildup near the condenser, it was already leaking with water so i immediately apologized and clean the place. The water retainer inside the pop machine is full of water and the ice is melting and thereby some water is coming out from the pop machine.

The video below was taken last week when the soda pop vending machine was leaking.

How to fix a leaking soda pop vending machine ?

I instinctively asked for a small large 2 liter plastic containers from a cleaner which im in very good terms and inserted in the soda pop machine and wanted to see if there are any leaks from my temporary solution.

What i did to temporary stop the soda pop machine leaking was :

This is the video i took when the soda pop vending machine is not leaking.

I was very happy that the plastic container had a partial water buildup and the surrounding was dry. Anyway the machine is already on the period of Jurassic and i needed to have some help from Coke. I hope they will have it replaced as they did with my other locations.

If they don’t replace it then the above method is a simple yet effective temporary solution. I have some soda pop machine with the same setup on partial icy buildup near the condenser and i simply have a large plastic container to hold in case there are some leak. Whenever i visit the locations with the plastic container, i would just simply use the excess water for plants if there are or just dump it in the toilet.

The rain was pouring very hard and it was also that day that i received a call from a public location that both vending machines are located outdoor.

I have some vending machines that are outdoor and had some bad experience with it.

This was happening to the machine when there is rain. When you are depressing the keypad on the machine the numbers doesn’t show up what it is supposed to.

For example if i press 1 the display shows up 2, when i press 6 sometimes it shows 1. This happens when there is rain on the snack machine.

This scenario doesn’t happen if it is a soda pop machine since most of them are built to be used for indoor or outdoor.

I was thinking at that moment that maybe a wooden plank on top of the snack vending machine can be the solution, but what if the person’s fingers are wet from the rain and the long term effect will be water damage would have occurred inside the keypad and would cause some short and thereby affecting the main board. After all the keypad is connected to the main board so it is best to avoid water entering the keypad.

I was servicing the location for the longest time and had some form of rapport with the staff. I was initially asking for a wooden plank that they don’t need to be placed on top of the snack machine to avoid the rain traveling down to the exposed keypad which is very vulnerable.

Thanks to the staff that he suggested instead to put a sticky plastic wrap on the keypad and surrounding electronics that maybe exposed to the rain.

So this is the solution which i cannot explain in words but in video.

It is simple solution and yet effective. At first before the installation, when i was depressing the keypad 2 it displays 1. When i cleaned it dry and applied the plastic wrap on the vending machine keypad and the surrounding areas, seems that the problem is solved.

I did not receive any phone calls for the moment from this location.

There are times that in one day there are several problems that need to be addressed. Some people think that vending machine servicing is very easy and everything is laid out as scheduled.

As a vendor you have to be prepared all the time for such uneventful situations.

Lastly, there was another location that just received a permit to renovate. I was serving this location for a long time but they wanted a major renovation done on the lunch room. It was not renovated for more than 15 years. It was also a small uneventful surprise that the management informed us that it has to be removed and never come back.

The location wanted to change everything including the concept of not accommodating anymore vending machines in their premises after the major renovation that will be taking place on December.

I was also a bit fortunate that im constantly connecting with local locators to have standby locations that need vending machine placements. The machine was immediately transferred to another location that considers chips, chocolate bars and soda pop as essential necessities for temporary pick me up fuel.

On some rare occasions i was able to find locations on my own but of course i already have my hands full on running around filling up products on vending locations. My native tongue is distinctively not English and the way i speak English is not coherent and in tandem with Canadian English.

I don’t even sound with a thick Filipino accent. I have lived in Hong Kong, Singapore and traveled extensively in Asia before and lived in a multicultural city in the Philippines where my neighbors are mixed. Makati City which i mentioned many times on my previous blogs. I’m very comfortable with all kinds of people.

I would like to take up some ESL courses in the future meetup and learn how to make a sales pitch when approaching locations. 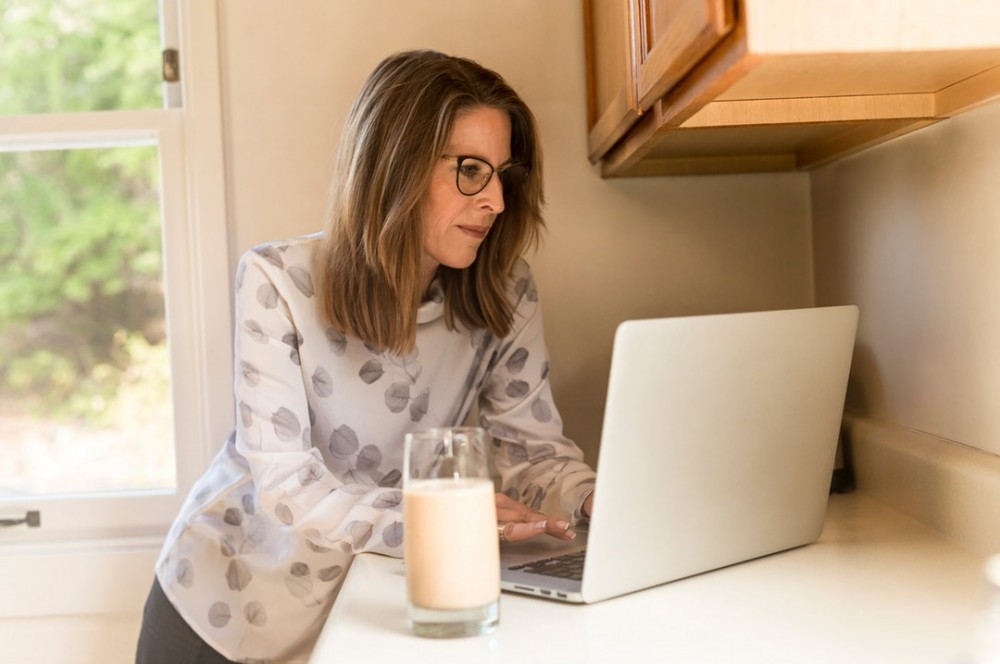 Seems that vending machine operators still need help from reputable locators and some vending equipment suppliers where they also provide some locations occasionally.

Everyone in the vending machine business industry have to work hand in hand in order to keep the ball rolling. If im not the one who is running the location then another vendor acquaintance will do it and vice versa.

Most locations just change hands and rotate among the vending machine business operators. 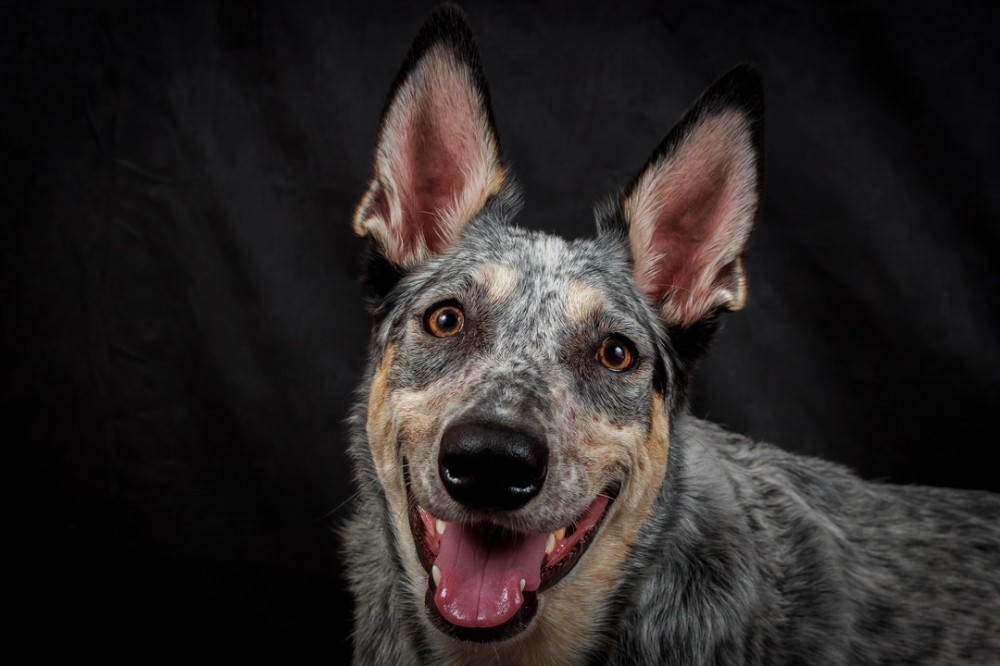 Do you think that there will be a day when you will be coming back to a previous location that you were serving before ?

How Much Water in Watermelon?
Don'T Crowd the Mushrooms?
How to Get a Free Vending Machine From Coca Cola
Can You Partially Cook Ribs And Finish Later?
Can You Reuse Confit Oil?
Can You Put Undercooked Cookies Back in the Oven?
6 Kinds of Chips To Eat With Spinach Dip
How to Reheat Puff Pastry?
What is the Original Gatorade Flavor?
How To Deal With Customer Loosing Money On Vending Machine
Tweet
Email
Print